What exactly do you need?

Think back: what did you do last time your company needed to develop a website?

Perhaps you googled “new website” and called the company at the top of the search results list (they came first, so they must be the best).

"I want to order a website. When can you have it ready?”

Or maybe you started to research the topic a little bit. What types of websites are available? What platforms are there? Which providers can help with which service? Can I find business cases and experiences that can guide me?

If you chose the last line of research, you probably realised that you are only just scratching the surface – terms like web hosting, domains, HTML, plugins, cookies, API, widgets, CSS and so on, popping up all over the place. All of them used to create websites. And you are probably going to have to sink your teeth into some of them if you want to end up with a website that succeeds in satisfying your expectations and meeting your needs.

It is essential to define the text that is to be translated. This has an impact on which translator is used for the project. A professional translator must be able to do more than “just” translate the text into the relevant language. He or she must be an expert in the specialist field and in the type of text. This will ensure that you get the best results.

This is also why at World Translation we work with a large network of specialist freelance
translators all over the world. Because your text deserves someone who is an expert in your field. Click here to learn about the World Translation approach to translation.

But if translation is more than “just” translation, what do you really need? Find out here!

This article provides you with insight into some of the key terms that language service providers use when talking to customers: translation, localisation and transcreation.

Even though these terms are independent of one another, there are some connections linking them. You should view them as three different levels of the same service. Imagine a stairway with three steps. Translation is the first step. To achieve localisation, you add a new level to the translation work. Transcreation is at higher level above localisation and requires even more work. The level of service that you need depends on how nuanced you want your
“text transformation” to be.

For the sake of getting an overview, let’s visualise the terms and their definitions: 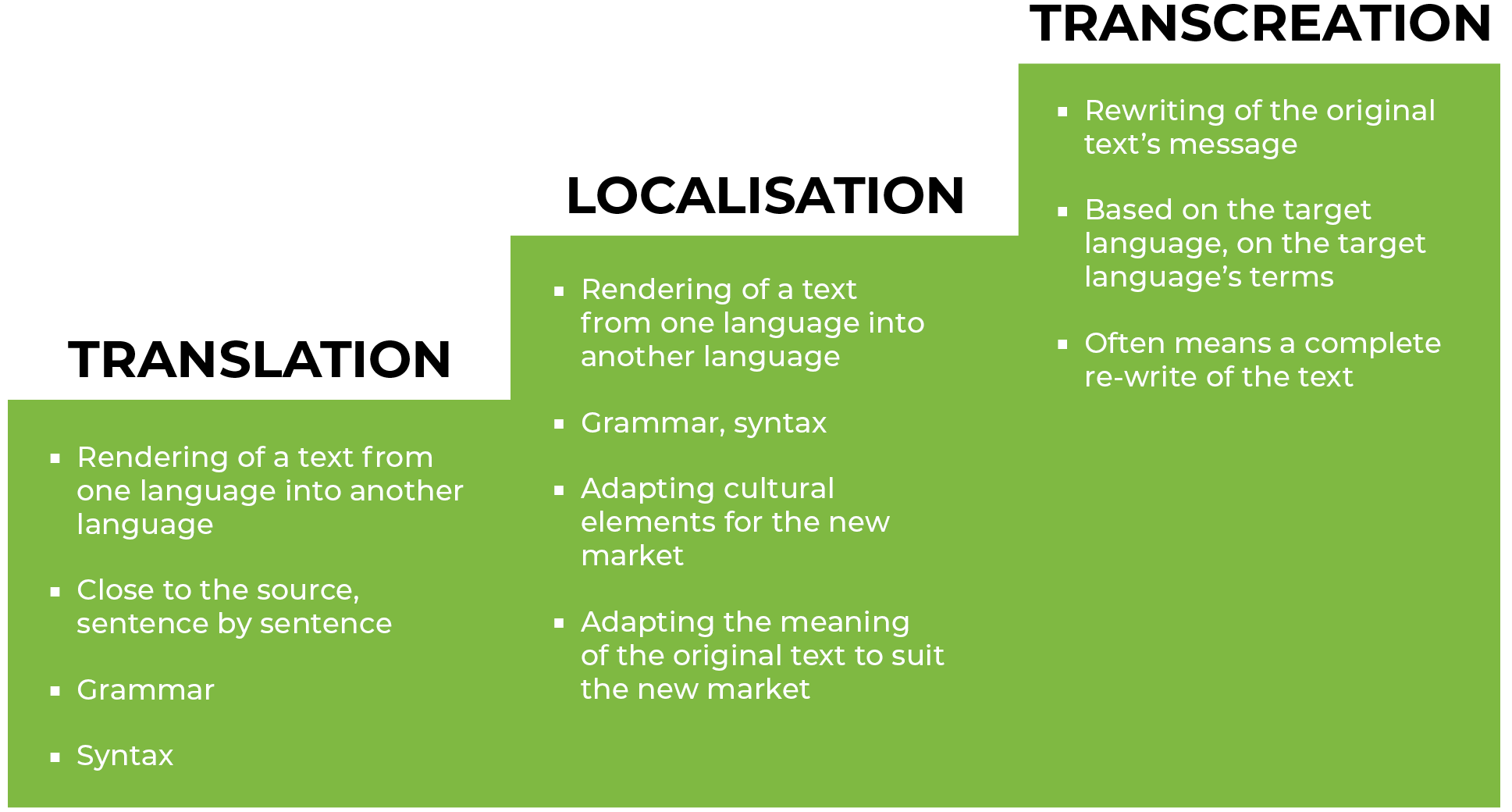 Translation is the first level of language transformation. But before we define what translation is, we need to make one thing clear: Translation is used by many people as a collective term.
As an umbrella term, it more or less covers everything that has to do with changing a text from one language into another language. We admit this might be a slightly confusing way to
approach the subject. But stay with us, and things will become clearer!

Even though “translation” is used as an umbrella term by professionals and non-professionals alike, it is also the term for an independent level when transforming a text into another
language. It is the first level, where the work to convert the original text is the least nuanced.
In the work to render a text from one language into another, the translation respects the
grammatical rules and syntax of the individual language. The text’s meaning is rendered into the new language, sentence by sentence, or passage by passage. In other words, the translation stays very close to the source text.

Here is a specific example of a German sentence that is translated to English:

The content is precisely the same, but the translation takes the rules of the target language into consideration relating to how dates and currency amounts are normally written.

Localisation and translation are often considered to be highly comparable terms. Synonymous even. But even though the two terms share similarities, they also have some definite differences.
You should think of it like this: rather than focussing your entire attention on the source text
(i.e. “just” translating), you widen your focus and take other aspects into consideration. There can be cultural aspects, like units of measurement, names, prices and much more. Whereas translation stays close to the source text, working with localisation means that you take the
cultural aspects into consideration.

Let’s use a specific example to show you what we mean:

On many occasions Coca-Cola have ran advertisement campaigns where their bottles have been personalised. In the USA, this meant you could buy bottles with the message "Share a Coke with John / Jack / Jenny". In Denmark, the names Rasmus, Camilla and Peter were used. In China
however, it is impolite to name people with their first names in that way. Coca-Cola solved this issue by using nouns instead of names: "Share a Coke with a classmate / a close friend" and
similar.

It is the essence of localisation: where you move away from the original text and adapt the same meaning for new markets.

You can of course be in a situation where most of your text shall “just” be translated and that only selected elements need to be localised. It could be a user manual with facts that must be translated close to the source text, sentence by sentence. But the same user manual may
contain dimensions or units of weight that need to be adapted for different markets. If this is the case, the task is to translate the text, with localisation of selected elements.

Do you think the difference between translation and localisation is still a little hazy?

When this sentence is translated into English, it reads:

The sentence makes sense. But if you want to use it in the English market, it doesn’t make sense to state the price in Euro. In addition, it is not optimal to state the weight in
kilogrammes.

If the sentence is to be fully localised for the UK market (British English), it would read:

"He lost just over 3 stones and 2 pounds in two months with a personalized meal plan that cost almost 114 pounds sterling. He started the diet on 28 June 2021 and exactly two months later he had lost 20% of his body weight."

So far so good – the sentence is now localised for the UK market. However, it does not mean that it can be used in every English-speaking market around the world. For example, if it is to be localised for the American market, it would read:

This is because the American market uses US dollars for currency and a different format for dates.

Texts in apps, games and websites are typically the kinds of texts that require localisation.

Transcreation is a more recent term in the translation industry. In some contexts, transcreation is considered a counterpart or further development of marketing translation, which is freer in form compared to the more stringent types of translation (e.g. legal and technical translations).

Transcreation means that the source text shall not be translated but rather the target text must capture the same deeper meaning of the original text and the context must be adapted for the new language. In other words, the text is not rendered into another language, it is the message that is rendered into another language. This means that the finished text for the new market may be unrecognisable compared to the source text. The entire objective with transcreation is to free yourself from the original’s concrete words and to ‘start again’ with the text. Transcreation must communicate the same basic message and employ the same emotions as the source text – but on the target language’s and target culture’s terms.

Need an example? Here's one:

The technology giant Intel used this slogan a few years ago: "Intel: Sponsors of Tomorrow".
It was intended to emphasise the company’s innovative and forward-looking work. However, Intel had to devise a completely different slogan for the Brazilian market. Studies had shown them that users in the Brazilian market perceived the original slogan as saying that Intel would achieve their own promises in the future but not right now. Intel therefore decided to change the slogan in the Brazilian market to: "Intel: In Love with the Future".

A talented writer was able to transcreate the text, using their knowledge of the new market, knowing what would work and what would not work.

This article is mainly to do with three terms. But we have decided to give you a bonus term too. It is something you can keep in the back of your mind, now that you know the relationship between translation, localisation and transcreation. It is a strategy for how to tackle your work with writing copy in situations where your texts need to be more than “just” translated.

The strategy is called internationalisation. It is a strategy for formulating your texts so that they are easier to localise. In other words, it is about taking a forward-thinking approach and making the text ready for localisation in the future.

A good internationalisation strategy can for example take potential problems with plural forms, units of measurement or different genders into consideration for other languages.

For example: The text on a button can potentially vary a lot depending on the language being used.

Here the programmer, keeping an eye on internationalisation, will incorporate this in the design of the button, as some languages take up more space than English. The programmer will design a button with extra space, so it will not be necessary to adapt the size of the button for every
single target language after the text has been localised.

If you want to send the same signal in different markets, it may be necessary to incorporate this aspect in the design, so that you can easily change cultural elements like colours.

These design perspectives can also be rendered into the creation of texts. For example, if your text must be localised for new markets, you can beneficially incorporate it in the text “design”, i.e. the way you devise and formulate the text. Consider whether culturally specific elements such as phrases, expressions or references are necessary or whether they can be made more neutral. For example, consider the Danish word “hygge”. It has become recognised as a Danish word that cannot be translated literally. You can compensate for this by using several words to explain the concept that is represented by the word “hygge”. The question is therefore whether you should use another word instead of “hygge” in the Danish source text in order to save a lot of work with the translation.

In other words, you can have an impact on the transformation of your text if you take a long-term view when you devise it. Take the pitfalls into consideration and think about the markets in the future that your text will be used in. It makes the translation work much easier.

There is a lot of translation jargon out there and if you become even slightly familiar with it, you will benefit from this when you work with language services providers. To learn about many of the translation concepts that our industry uses, visit our technical knowledge bank.

Don't be a stranger!

Green Instruments is an international company operating in the field of environmental technology and specialising in the areas of measurements, analysis and sec...

Press release: Pascal Hector, the German ambassador to Denmark, has paid a visit to World Translation A/S in Tilst near Aarhus on his own initiative. The visit ...

How do you train your new employees, so they are fully up to date with advanced systems and procedures? How do you give them insight into complex products and s...