How much does a translation cost?

We’re tempted to say “unfortunately” to begin with. Because unfortunately there’s no simple
answer to: “How much does a translation cost?”

There are a number of different parameters that need to be taken into account when calculating how much your translation is going to cost. Obviously, we want to give you the very best price and one that matches your needs.

Spend five minutes of your time reading this article and learn about how the translation industry uses price matrixes – we promise you that you will have learned something useful!

1. Why don't all languages cost the same?

2. Text is more than just text!

5. When it literally pays to keep using the same language service provider

1. Why don’t all languages cost the same?

It would be neat if all languages cost the same to be translated. That the source language, target
language, specialist field, type of project and any other detail you can think of didn’t make a
difference.

But they do. In terms of economics, as with many other types of goods and services, translation is about the relationship between supply and demand.

There are two main parameters that are crucial in determining the cost of a translation:

For example, take Icelandic. Only 360,00 people live in Iceland, so the language is considered a ‘minor’ language. In general, Icelandic speakers are a relatively small group of people. Naturally, this also means that the number of people who can professionally translate to and from Icelandic is even smaller.
In other words, there are very few professional Icelandic translators available, even though there is a level of demand for translations to and from the language.

Now, you would think that if one of the languages in your language pair was a ‘major’ language things would be different. For example, there are a huge number of native language French translators who can translate languages into French. But if your original source file is written in a ‘minor’ language or if the combination of source and target language is rare (e.g., Chinese-French), the translation will be correspondingly more expensive. Fewer translators competing for assignments à higher price per word.

B) How popular is the language?

English and German are both major languages. Globally, there are millions of people who speak these two languages as their native tongue, and they are both relevant in large markets that have a lot of purchasing power around the world. This should mean that there is a lot of
“translation competition” for both languages, which should clearly result in a low price per word (many translators competing for assignments >> high price competition >> low prices).

But in fact, there is actually a large difference in the popularity of the two languages when it comes to learning them. Compared to German, more people learn English as a foreign language. This means that there are fewer people who can translate from German than there are who can translate from English. And once again the price is affected. For example, it means that a German-Spanish translator will charge more than an English-Spanish translator since there are far fewer German-Spanish translators around who can bid on translation assignments in this language combination.

2. Text is more than just text!

The type of text that you want translated is another important parameter when it comes to the cost of your translation. The language combination is not the sole parameter that determines the price of the translation. The type of text and its difficulty also has an impact on the price. Certain types of text are easier to translate than others. Some texts require that the professional translator spends a lot of extra time researching the specialist field. Some texts may have a
limited frame of reference or not have a clear context. For example, consider user interfaces. They often contain short sentences, sentence fragments or single words without much context. This requires thorough research by the translator to select the correct translation for your
particular user interface. In addition, some types of texts require that the professional translator has specific extra competencies. For example, take legal texts. Difficult texts like those are more expensive to translate.

Language service providers love recycling! But it’s not the kind of ‘sustainability’ that you
normally associate with recycling. When we talk of re-using sentences and text fragments, it is also partly about being able to communicate consistently over time. It is about avoiding
confusion in the reader’s mind by not saying the same thing a hundred different ways.

This principle of re-using previous translations in the translation process, also helps to
determine the cost of your translation. Before we go into the price calculation in detail, you need to know about a couple of translation industry terms first. These terms describe the degree of re-use:

So far, so good. You now know some of the different terms associated with the recycling of text that are used by the translation industry. But how exactly is the total price calculated?

It's actually done automatically. When you submit a text for translation, your language service provider will create a brand-new project in their CAT tool. During this process, your text is
analysed for internal repetitions, and analysed for matches in your translation memory for the language pair in question.
This analysis works out the matches found in each category of matches (fuzzy, 100%, etc.):

This is also why we talk so much about ensuring your source texts are consistent. You may
already have heard us mention this. Ensuring your texts are consistent means you have a
consistent tone-of-voice.
In other words, you use the same terminology, phrasing, etc. It also helps to define your
company’s identity when you remain faithful to the way you say things. And it also benefits your translation budget.


Let us give you a concrete example. Here are four sentences that basically say the same thing:

“Safety regulations for the operation of the machine”

“Safety regulations for the machine’s operation”

“Regulations for the safe operation of the machine”

Another thing you should know: You get the most for your money when you use a single
language service provider to take care of your translation projects.

Learn about the many reasons why this is true in our blog article.

5. When it literally pays to keep using the same language service provider 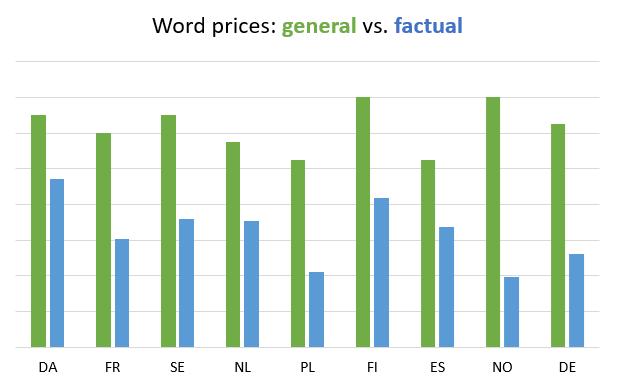 The No Match price is one thing. In other words, the price you pay for sentences that must be translated from scratch. But your actual average price per word for the text is another. This will fall in line with your translation memory becoming larger. Especially if you are consistent in the way you write things. We may have mentioned that before. The graph shows it’s true.

Something else – word prices are only part of the explanation. The better your language service provider knows you and your company, the better they can collaborate with you in optimising the work processes. And optimisation is, as you well-know, great for the bottom line.
But optimisation is really another topic for another day. Although we should mention,
optimisation is exactly what you get with the many options available in our Language Portal. When you use World Translation’s Customer Portal, and World Translation’s other language services and technologies you are able to get your language tasks done as efficiently as
possible.

SEA: Are you making the most of your advertisements?

Most companies today are familiar with SEO (Search Engine Optimisation) and use it actively on their websites. However, if you want to give your site an added b...

CASE STUDY: Viemose DGS develops and manufactures products, processes and technologies for greenhouses and is the largest manufacturer of its kind in Scandinavi...